Deep Creek Lavender Farm Takes Root in the I-68 Region

Deep Creek Lavender Farm Takes Root in the I-68 Region 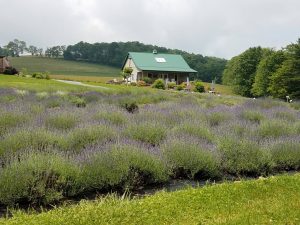 Despite not being an Accident native, the Davidson family is deeply rooted in the community. Davidson spent her childhood in the Baltimore area, but fondly remembers visiting the Deep Creek Lake area during the summers. Her husband, Scott, shared a similar connection to the area, and when the couple had children of their own, they brought them to Deep Creek to continue their summer traditions. As their children left the nest and started lives of their own, Anne and Scott purchased a tract of land in Accident and built a second home. It was while searching for a way to make use of the rest of their land that Anne embarked on a night of internet investigating that ended with inspiration to start a lavender farm.

“We really never ever envisioned doing a business here—never!” she recalls over a decade later. But restlessness and curiosity got the better of her, and before she knew it, she was planting and experimenting with lavender plants. “Those were always things that we liked to read about but never thought we’d get to do.” It took three seasons of planting before the majority of her lavender shrubs survived, and several more seasons before enough lavender was grown to open the farm to the public.

Although it may have been slow to start, today Deep Creek Lavender Farm is thriving. The fragrant lavender is in prime bloom during the end of June and the first weeks of July, which coincides with peak tourist season in the area. The Davidsons offer lavender products in the farm store, as well as classes and pick your own lavender.

The Garrett County Chamber of Commerce has been “by far our best advertiser,” directing tourists to the farm and greatly promoting the farm. The Chamber is only one part of the “real sense of community” the Davidsons have experienced through their work at the farm.

Working in collaboration with other local businesses, the Davidsons offer lavender-infused maple syrup, pepper jelly, pear butter and other delicious treats at the farm store, expanding their retail options and boosting other businesses, who do the same for them. It’s a perfect example of the bonds and networking that helps small businesses succeed.

Anne attributes the farm’s success to their strategic location. While high summer is the farm’s busiest period, a steady stream of tourists and locals keeps Deep Creek Lavender Farm running from Memorial Day to Labor Day. Visitors from Baltimore, Washington, D.C., West Virginia, Pennsylvania and even Ohio stop by the farm on their way through the I-68 corridor. As Anne says, “It always keeps business flowing.”

Learn more about Deep Creek Lavender Farms plan your outdoor adventure on their website.  Interested in the I-68 region’s strategic location and agri-tourism potential? Explore the I-68 Regional Alliance website to learn more.

About the Author: Sandy Sponaugle