The way Bill Meagher tells it, fate lead him to the I-68 region. “I woke up one morning and said ‘Let’s go look at Deep Creek Lake,’” he says twenty-five years later. At the time, Meagher says “I knew a lot about ice cream—I knew nothing about Garrett County.” 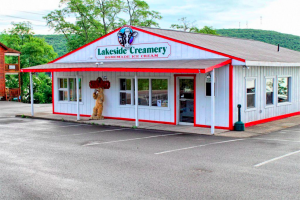 Meagher had been perfecting his ice cream-making skills and researching business sites, and he was seeking a location off the beaten path. Instead of struggling for recognition and competing for customers in the big city, Meagher was seeking something different—a true neighborhood business: “I wanted to open a homemade ice-cream business and become a tradition,” he says. “I wanted to go to a place where I would have impact in the community.”

Meagher and his family found that community in I-68 region. Impressed by the opportunities and lifestyle in the area, he decided to locate his business in Garrett County, and Lakeside Creamery was opened in 1995 on the banks of Deep Creek 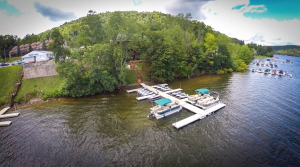 Lake. Over two decades later he and his family are “beyond happy” to have a home in this “amazing” area, where Meagher was able to realize his dreams of becoming entrenched in the local scene. Along with coaching soccer, teaching andvolunteering, Meagher not only built Lakeside Creamery into a successful dessert spot, he also opened Deep Creek Doughnuts, Fun Time Watersports and Copper Kettle Popcorn Factory. Outside the tourism industry, he is also involved in residential construction and commercial real estate, becoming one of the foremost entrepreneurs in the I-68 region.

What’s the secret to Meagher’s boundless productivity and business success? Not surprisingly, it’s rooted in his concern for the people he lives and works with: “I try to listen to what the community needs and asks for and try to fill those voids.” For Meagher, filling the void doesn’t necessarily mean cornering the market. Instead, it means creating “niche businesses” that resonate with both locals and out-of-towners.

Meagher’s businesses resonate with both customers and employees. Meagher speaks highly of the “dynamite” workforce in the area, and the average length of employment for his companies is five years—especially impressive for retail companies, which typically struggle with high turnover rates. “You’ve got this great spectrum of people to choose from,” Meagher says, characterizing the local labor pool as dedicated and good-hearted. Equally dedicated are local business resources, from Garrett County Economic Development to local officials and beyond. According to Meagher, “Rarely do you see business and government work so well together.”

Locate your business at the hub of strategic location, business services and support. Become an I-68 region entrepreneur. Learn more at the I-68 Regional Alliance website and start your journey to success today.